How big is your brave? A story of triumph to make you go after what you want today!

Last Saturday, after an extra long day at work and out on the LA roads, I happily came home to the delightful faces of my friend, Sarah, and her son, Soli.

You see, Sarah was doing her very first triathlon the following day. I happened to live a few miles away from the start line, so I offered to have her stay overnight with me so she could be closer to the start in the morning.

When I got home, I made her the best night-before-a-race meal I could think of (salmon, sweet potatoes, and mung bean pesto pasta), and, when he eventually got home, my husband, Ted, went through all of her equipment with her.

“Put your sunglasses on your helmet now so you don’t forget them when you get into the transition area. Where’s your sunscreen? What are you wearing under your wetsuit? Do you have a bag for all of this stuff? Nope. No, that one won’t do. Let me give you one of mine. Where’s your bike? I will put the tags on it for you.”

The equipment was all laid out on the floor in the living room, including the bike. Ted was methodical, and Sarah was grateful. As this was her first triathlon, she was openly nervous. A single, full time working mother of two amazing children, scheduling time to workout wasn’t exactly at the top of her ever growing list of things to get done in a day. Add in the kids’ extra curricular activities that took place in various parts of this traffic-ridden city, and it’s easy to see that time wasn’t exactly easily acquired in Sarah’s life. In fact, it seemed to be diminishing by the day. So signing up for the triathlon proved to be a driving force that hurled her into the world of training, a world she was unfamiliar with as of late, and one she would now have to make time for. Somehow. Someway.

Before the ceremonial laying out of all the necessary triathlon equipment, our friend, Doria, had arrived with her overnight bags so she could spend the night and be with Sarah in the morning (or more accurately, before the crack of dawn). Doria and I sat on the couch, watching Ted and Sarah get organized, mesmerized by the preparation. It was like watching a movie. We really should have had popcorn. Amateurs.

By the time Ted finished up his pre-race checklist with Sarah, it was 12:15am.

Off to bed we went until the alarms went off at 5:40am. Our friend, Tricia, showed up just then (another member of Sarah’s cheer squad), and I got to work making Sarah – who was already at the start – her pre-race oatmeal.

As promised the night before, Ted hopped on his bike around 6am to ride down to the start to meet Sarah, calm her down, and get her in the water to warm up and go through a final ocean swim lesson.

This was the most nerve racking part for Sarah. Getting in the ocean. Mastering the waves. Conquering her fear in the water.

I can’t write about the experience through Sarah’s eyes, because I’ve never actually tried to swim in this ocean (I’ve only ever tried to learn how to surf in it, and I looked and felt like drowned rat by the end of the lesson. I haven’t been back in the ocean since. That was 2 years ago.) But as someone who understands the power of the ocean, who has experienced her wrath in even a minor way and was left feeling beaten, I understood Sarah’s fear. The currents. The undertows. The riptides. The high or low tides. The ecosystem underneath you. So much to know. So much to scare you. So much to fight through if you’re unfamiliar with it.

Ted, an avid ocean swimmer, warmed Sarah up an hour before the race. By this time, our friend Kim had arrived with her daughter, Lila, in her bob. So we all eagerly watched Ted get Sarah in the water, shouting words of encouragement as she walked toward the crashing waves. Ted explained how to properly get beyond the waves, and how to ride them back in. Sarah came out feeling pumped, and yet, more nervous than ever. 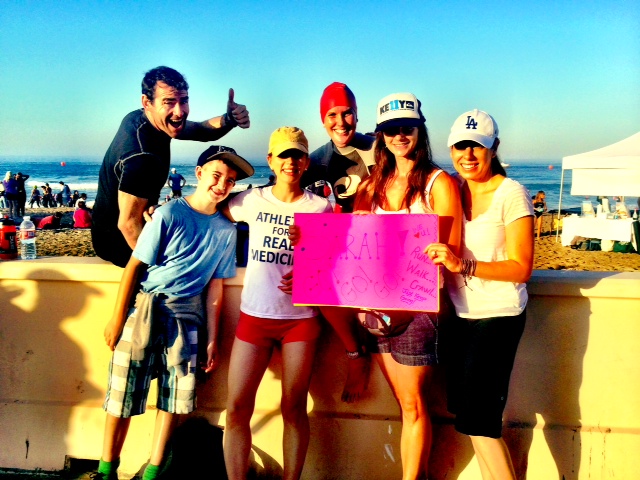 Soon, it was time for her wave to line up and get ready to start the swim. Looking like she might cry, Sarah obliged the call to the podium (well, it was sand, but podium sounded more official. And that’s how it felt – very official.). The gun went off, and with it, so did Sarah. Jumping up and down with excitement and shouting her name, “Go Sarah!” all of us couldn’t help but to get emotional. This was a big deal. A huge deal. This was about more than a triathlon. This was about conquering a mental barrier much deeper than the physical challenge she was about to endure. This was about proving to herself that she really could do what she said she would do, even things that scared her. And though she’s been doing it her entire life, this time, it felt different. It was a new kind of scary.

So when we saw Sarah get in the water, practicing the skills that Ted had taught her just an hour before, along with the ones from her swim clinics, we all couldn’t help but to feel a little envious, a lot emotional, and a lot empowered. Empowered to look into ourselves, into our own lives, and ask:

What have we been scared to do and haven’t done? What is holding us back? What have we told ourselves is impossible? Where have we let fear control us?

And that thought rang truer for all of us when, about 40 minutes later, Sarah emerged from the water after completing her swim, the biggest smile on her face, running along the sand from the ocean toward the transition area, ready to get on her bike to head into the second part of this race. But the bike and the run didn’t matter. What place she came in didn’t either. Because Sarah had already won that race the minute she dipped her toes in the water and emerged from it on the other side. Sarah had showed us, and more importantly, herself, how big her “brave” was. 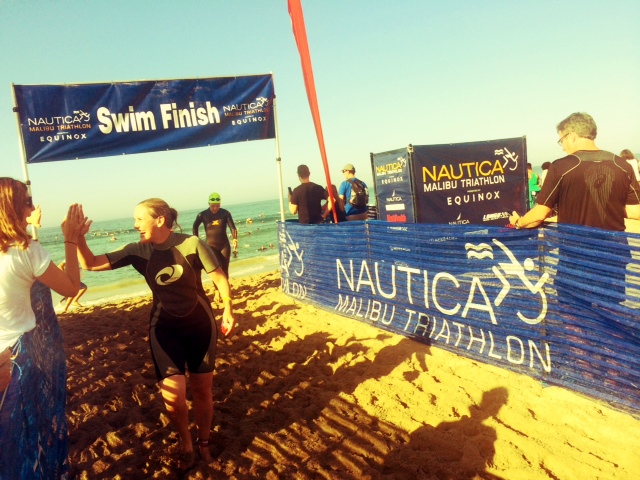 They say that success is what you do when no one else is looking. But we were all looking at Sarah that day, and what we saw was success tied up in a pretty bow, looking like a happy girl in a wetsuit.

To echo the great Nelson Mandela, it all seems impossible until it’s done. And as Sarah proved to us, and especially, to herself last Sunday, is that you can do anything you put your mind to.

So, what is it for you? And what are you going to do about it?

It seems that whether you want to sign up for your first triathlon, learn a new language, travel to a place you’ve always wanted to go – whatever it is – that all you need is a formula, a secret sauce that allows you to take the goal and break it down into bite sized pieces. Something that looks like this:

2. Get a coach to coach you through the training.

5. Find a support group: great friends who will cheer you on along the way.

So get out there, ride the waves beyond your fear, call on your courage, and do that thing you want to do.

Make like Sarah and show us how big your brave is. 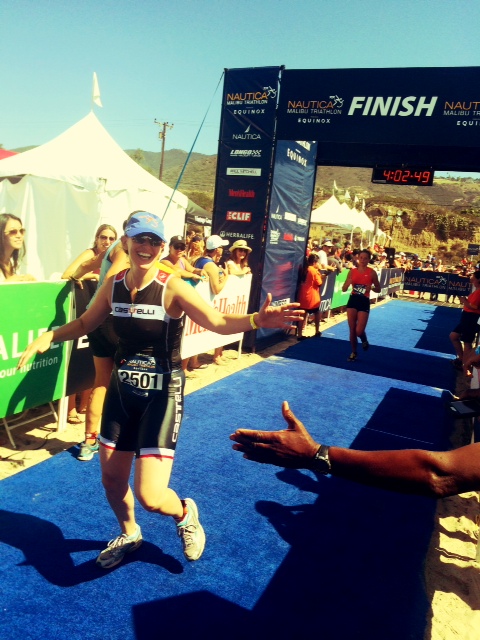 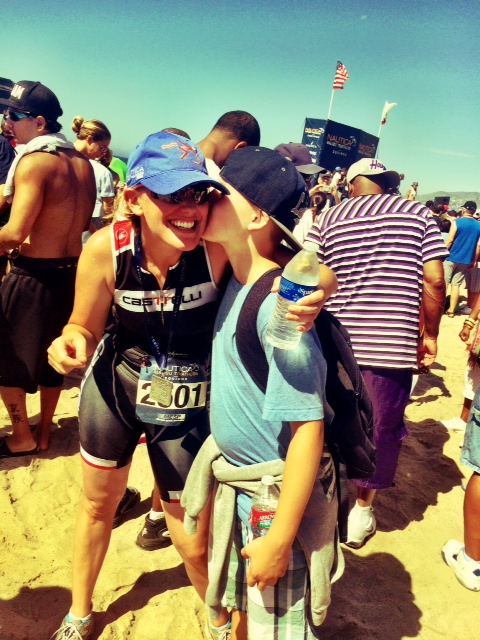