Life According to Tony Horton

Remember last week when I told you I was working on an article about Tony Horton’s latest book?

The book is called The Big Picture: 11 Laws That Will Change Your Life.

Agony be gone: the article got published! And the cherry on top of this big ice cream Sunday is that Tony Horton himself gave it his blessing.

I have copy and pasted it below, but you can also find it on The Good Men Project:

Tony Horton Gets Candid About His Latest Book, The Big Picture 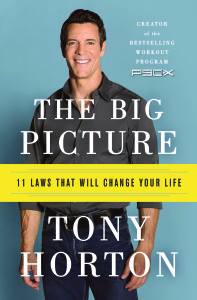 The inventor of P90X found success and happiness in helping others fulfill their fitness goals. But none of it came without a whole lot of work. Lauren Lobley reports.

At 20 years old, Tony Horton was just another face in the crowd. A pantomime at the Santa Monica Pier by day, a part-time Chippendales go-go dancer by night, an aspiring actor and comedian wannabe in between. When his agent told him he needed to get fit to get work, Tony journeyed to the only option he could think of: the gym. 35 years, a lot of muscles and strength of character later, Tony is no longer just another face in the crowd. In fact, at some point, he’s probably been a familiar face in your living room, 90 days in a row, coaching you to a better body, and arguably, a better life.

Though he didn’t become the successful actor/comedian he had once hoped he would, Tony’s life changed for the better as a result of a strong dedication to fitness and health. When he haphazardly became a trainer in his early twenties, one client led to another, which led to celebrity clients like Tom Petty and Annie Lennox, which led to a workout program called Power 90, which led to P90X, which led to, well, you probably know the rest: Millions of toned, fit, healthier people around the world.

“I always felt there would be something I could do that would help people. I didn’t know it was going to be as a health/fitness/wellness guy. I thought I was going to be an actor or a comedian or something in that realm. But this is better. This is much better.

“When [people] see me on their TV, positive changes are happening to them. They’re changing physically, mentally and emotionally. Their relationships are better, their energy is better, their flexibility, cognition, memory, sleep and sex drive is better. And all these things are happening as a result of working out with me. And so it’s a much more rewarding experience. It’s pretty wild actually.”

Though it may have started with diet and exercise, Tony found that those elements were only the starting points of what it took to live a successful and fulfilling life.

“In all the years I’ve been doing this, what I’ve noticed is that it’s not just about the diet and the exercise. Yes, those 2 things are obviously critical. They’re the foundation of everything you need to get better. But I learned there are many other things that need to be applied to your diet and exercise.”

30 years after finding his way to the gym, Tony found his way through life, collecting tidbits of wisdom and information along the way. He has polished and wrapped them up nicely in shiny paper and a pretty bow, and has laid them out for all to see in his latest book, The Big Picture: 11 Law That Will Change Your Life.

The Big Picture may be Tony’s third book, preceded by an e-book called Crush It and another book calledBring It, but this is his first “non-fitness,” or rather, self-help book.

“All self-help books work. All fitness programs work. All diet programs work too, but they have to resonate with people and be doable in the long run. You can’t feel deprived, neglected, overwhelmed or underwhelmed for that matter, or it’s going to fade fast.

“So what is the magic formula? What is that thing where you want to keep coming back? And sure, are some days going to be brutal? Yeah. But The Big Picture is this holy grail, this fountain of youth that you know is there based on the information you’re applying to your life. That’s really it.

“The contents of the book very clearly explain how anybody can go to the next level. And not only to go there but to be able to stay there with relative ease. Create better normals.”

Among the 11 laws in The Big Picture are things like: Doing your best and Forgetting the rest; Finding your purpose; Having a plan; and Staying flexible. The laws are designed to help you not only get to the top of your mountain, but also, to stay there.

“You know, once you get there how do you stay there? That’s the hardest part. But hard’s not a terrible thing. Hard makes for an incredible journey.”

So if Tony’s been at the top of this mountain for so long now, what took him so long to write this book?

It’s safe to say that Tony is a different man than he was 30 years ago. In fact, it’s not uncommon to see him at a yoga class in Santa Monica most Saturday afternoons, if he’s in town, of course. When asked whether he thinks masculinity in the world of fitness has changed in these modern times, Tony had this to say:

“I think it’s changing a little. Slowly. It’s not weird for guys to go to yoga anymore. It’s not atypical. More and more men understand that there are elements of physical movement in yoga and pilates that will help you stay younger longer. And pilates and yoga are obviously two very simple ways to do that.

Traditionally, a lot of men automatically gravitated toward those, you know, push-yourself-to-the-limit kind of routines. Now more and more men are understanding that the pendulum needs to swing in the other direction. It’s about balance. Yin and yang. Simple.”

Ever the modern man, Tony practices what he preaches. He applies his 11 laws on a daily basis, which have arguably made him a more calm, understanding, sensitive, and albeit still masculine man compared to himself 30 years ago.

“Well, there’s no one size fits all here, but if you look at who I am compared to some of my ancestors, I’m a completely different person with the way I approach life. I’m not as attached to the outcome of events. I understand that my expectations and reality don’t always line up. I get disappointed but I don’t mind falling down and getting up and trying again. I like to be competitive – and I am – but I’m not hyper competitive. When I was a little kid, if I lost I was miserable for 2 days. If I won I was happy for 20 minutes. Those attitudes are gone.”

But being a modern man, according to Tony, goes even further than that:

“I would say the real shift is less about me and more about altruism. I think more and more men [could begin] to look at different means in which to find happiness and joy and pleasure as opposed to the traditional ones that we think make us happy, which have too much ego involved. So less ego and more altruism and civility in my opinion.

“Start to do things that have nothing to do with you and your self importance but have everything to do with how you can be a good example to people. Because, where does the ultimate satisfaction come from? It comes from seeing other people get better.”

When it comes to being altruistic, Tony doesn’t just talk the talk, he also walks the walk. And he starts with those closest to him: his long time girlfriend, Shawna Branon:

“You know, when it comes to Shawna, my goal is to make her life better. And she does the same for me. As a result, both of our lives are better and there’s tremendous satisfaction that comes from that. That’s why we’re still mad for each other 5 years in.  She does ridiculous, amazing, super califragilistic things for me all the time. I just want to do the same for her. It should work that way for your kids, your co-workers, the people on your street, in your town, in your community, in your country. That’s what The Big Picture is about. It’s not about you so much. It’s about what you can do for others who are looking for your help. Bingo.”