Work less, play more: What my daughter is teaching me about bringing the fun back into my adult life

Tis’ the season for holiday parties, Christmas movies (Santa! I know him!!) and clearly, music too! As I’ll take any excuse to bring people together, this year, I hosted my very first holiday potluck!

I made it potluck styles to make it easier on myself, right down to the BYOB (the whole full time mama gig makes hosting parties a tad harder, so in the name of bringing people together for the holidays, I was happy to take all the help I could get). When one of my esteemed guests came into the kitchen to greet me, he handed me a bottle of wine and asked, “Where shall I put this?”

“I’ll take it,” I said, taking the bottle of wine from him, about to head over to the makeshift bar I had set up in the living room (or was I going to the closet to drink it all myself? I guess we’ll never know).

“Tell me where it goes, Lauren,” my friend Scott said helpfully as he stealthily took the bottle from my hands.

“Well, over here!” I said as I skipped over to the living room.

“Did you just skip?” asked Scott, a mixture of surprise and probably a hint of making fun.

“Why yes, yes I did, Scott!” I laughed as he set the bottle of wine down along with the others on the table.

I can’t remember the last time I did that. Skipped, I mean. And then I found myself wondering:

When did I grow up and stop playing? When did I separate play from adulthood? Why can’t I adult and play all at the same time? (I know. Deep thoughts to have in the middle of a get together. Inconvenient. I tabled them for later).

Earlier that morning, my friend Amanda came over to help me set up for the party. I took the opportunity to leave Madison (my 9 ½ month old daughter) with Amanda while I grabbed a quick shower. When I was done, I opened the door to the bathroom and heard the most glorious sound:

Then I heard Amanda say, “Booooooom!” in the most playful way possible. That was followed by another bout of giggling from Madison. This pattern continued as I – with a big smile on my face – finished combing my hair, got dressed, and eventually ran down the stairs to see what was making my daughter laugh so hard.

Amanda was stacking up Madison’s blocks and then letting Madison knock them over. Amanda would say, “boom!” every time the blocks fell over, which left Madison in stitches.

They had been playing this game for a good 20 minutes (I captured the tail end of it on film if you’d like to see it here).

I’m certain that it was my daughter’s giggles from that morning that reverberated in my soul so much as to lead to my skipping escapades later that day.

As adults, how often do we do that in our days? How often do we play? Skip? Play with blocks? Play catch? Play hopscotch outside of our house? Lay on the floor and wrestle playfully with each other?

According to this New York Times article,

“While grown-ups recognize that pretending helps children find their way into the world, many adults think of play as separate from formal learning. The reality is quite different. As they play, children develop vital cognitive, linguistic, social and emotional skills. They make discoveries, build knowledge, experiment with literacy and math and learn to self-regulate and interact with others in socially appropriate ways. Play is also fun and interesting, which makes school a place where children look forward to spending their time. It is so deeply formative for children that it must be at the core of our early childhood curriculum.”

It goes onto say that,

“Barbara Biber, one of Bank Street’s early theorists, argued that play develops precisely the skills — and, just as important, the disposition — children need to be successful throughout their lives. The child “projects his own pattern of the world into the play,” she wrote, “and in so doing brings the real world closer to himself. He is building the feeling that the world is his to understand, to interpret, to puzzle about, to make over. For the future we need citizens in whom these attitudes are deeply ingrained.”

So if play is so important a building block to our success as adults, why should it ever go away?

I don’t know about you, but I know for me, somewhere along the way to adulthood, play was replaced with responsibility. Chores. A job. Money. Work first, play later.

Somewhere along the way, being an adult became equated with no longer having fun.

Now wait a minute, you might be saying. I go on ski vacations and I go surfing and I go to the gym and that’s fun.

Ok, cool. Good for you. I do too (minus the surfing part). I’m not talking about that kind of play. I’m talking about the magical playful moments that can be found in every moment of your days, even your work days. Do you not save up for those vacations and only get to do them a few times a year, and spend the rest of the year being “responsible” in such a way as to forget to play each and every day? Can you find the joy in something as simple as sitting down with a wooden spoon and a piece of tupperware and watching how the two objects interact? (not with losing yourself in your social media feed as you scroll through posts about asshole cats, laughing babies, and John Oliver’s latest rhetoric about our new President Elect, though I’ll admit, I enjoy doing that too).

As a kid, I remember getting home from school, dumping my backpack inside the front hall, and going back outside to play with my brother, sister and the neighborhood kids. I remember recess. It was glorious. You’d leave your school books inside and go outside to play three times a day throughout the school day! That’s a lot of play time between 8am and 3:30pm! And phone? What phone? Social media what?

When is the last time you gave yourself a recess during your work day? Let alone two or three of them? Doesn’t that sound like fun? And why shouldn’t you get to have fun, even while you work?

I dare say I think you should.

And so, a huge shout out to my friend, Amanda, and my daughter, Madison, for reminding me to stop taking life so seriously all the time (even when you have 70 people coming over in 30 minutes and you haven’t even showered yet) and to just good old fashion play.

Being an adult doesn’t have to mean you stop playing. If anything, it should increase as your responsibilities do.

So take a cue from my sweet daughter’s laughter. Play with some blocks. Break out those games that used to light you up as a kid (anyone remember devil sticks? Skip its? Jump rope? Pogo sticks? Bouncy saucers?), and go play.

In no time, you just might find yourself skipping down the street as you skip to the beat of your own drum.

Love,
Your crazy friend who often takes herself too seriously and her playful daughter who never does,
Lauren & Madison
xoxo 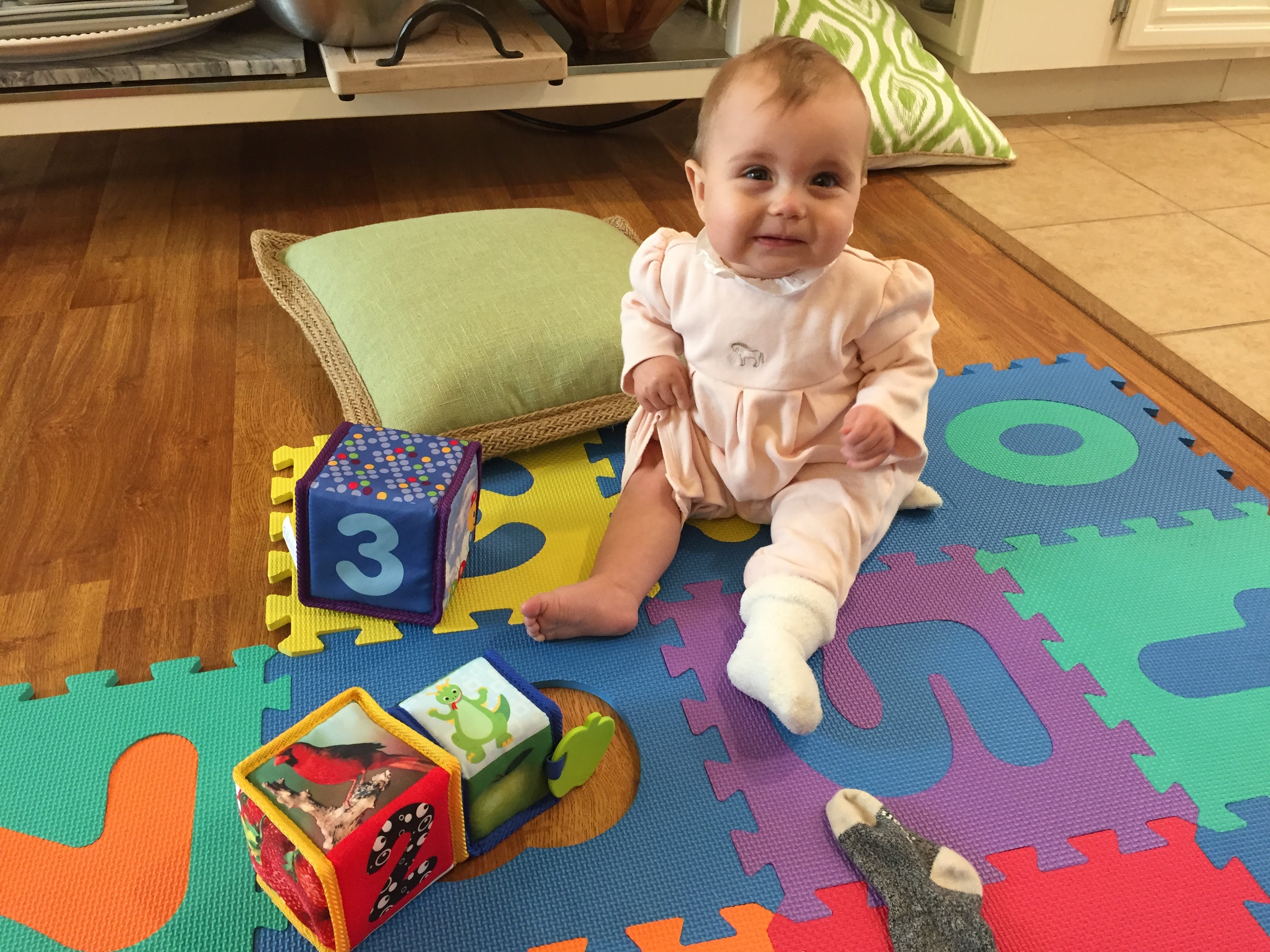